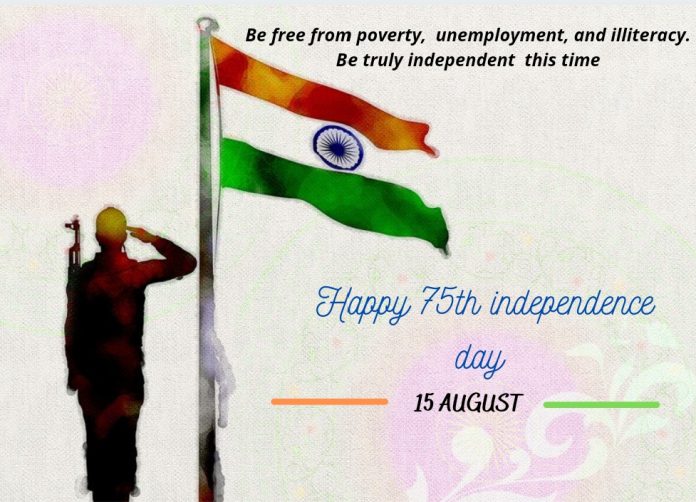 15th August- India’s Independence day, but are we truly independent?

Independence is defined as being totally free from any kind of influence, or having freedom from being governed or ruled by any other nation ( in political sense). But being free from anyone that can negatively influence our life is what we call truly independent ( in philosophical sense).Now we describes India as an independent country. As we all know a country is made up of its people. So a country free means all of its people are free too. But we usually talks about India being free from the rule of British government. But only Britishers were not the conquerors. Then who else can conquered India? Well let’s make a list of the conquerors- poverty, unemployment, illiteracy, poor health,… and so on. Now look around yourself, look a around your society, your village, your city, your district, your state and tell me, do you find everyone or let’s say even majority of people free from these problems? If not, how can you say that we are independent? Despite 75 years after India become independent from the Britishers, we Indians are still suffering from a lot of problems. We didn’t became free from the influence of Britishers just to be again bound by poverty and unemployment. We Indians were dying during Britishers rule and we are still dying even after Britishers left us. So how is our situation any different now? I assume now you are getting what I am trying to talk to you. So why celebrating this independence day if you are still suffering from all these problems?

‘There are a lot of people on streets who celebrate their independence day by selling sweets, not by buying them. Those people are are not independent.’

When we will be declared truly independent?

When people in your society will stop dying from hunger and poverty, when children in remote areas will be able to achieve quality education, when poor people too will be able to to get best healthcare services, when all the corrupt leaders will be eliminated from our system, and a true and fair government will lead our country, then only we will be called independent.

Root cause of these problems

1. Our government being corrupt– there are hardly any system in our government where there are no corrupt officials. The schemes which are released by government to help poor people are being corrupted by officials who use that money for their own use and no money ever reaches the poor. Due to this, the gap between rich and poor has increased even more. This can lead to great economic crisis. 2. ‌ setting up of companies only in cities– generally any new companies are established in in urban areas. Schools and hospitals are stablished in cities also. Thus there are very few job opportunities in rural areas. So even though students who used to live in rural areas, later settle into cities. Therefore villages remain underdeveloped. Those people who can’t afford to migrate to cities remain settled in villages their whole life and they are unable to get a decent living. Thus cities are getting overcrowded and costly. This is also a major cause of poverty 3. A lot of tiers of government– the Indian government system is made in such a way that there are a lot of tiers of government like- central government, State Government government in each district, etc. Though this system was made so that no government would hold a lot of power, but this system as a disadvantage that it takes a long to time for any scheme to be released. Also whenever some decisions are to be made a lot of time got wasted. Does this is also a hindrance.