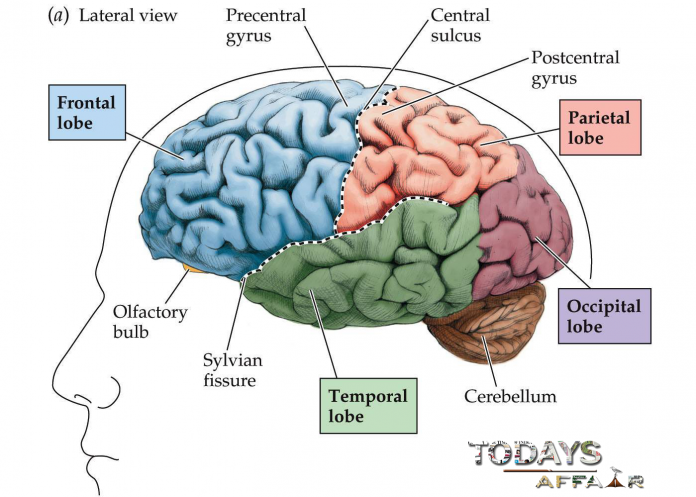 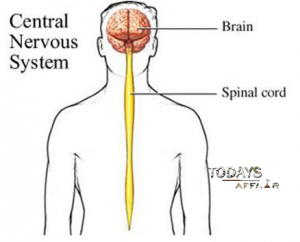 It is the hollowest part of the nervous system that lies along with the mid-dorsal parts of the body inside the axial skeleton. 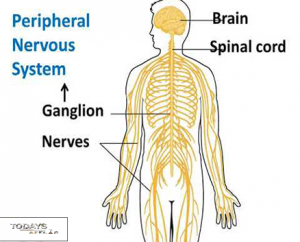 It has two component:- 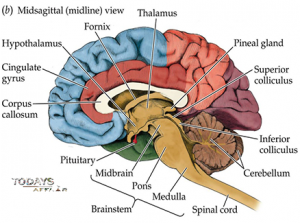 It is the widest and the uppermost part of central nervous system which weight 1.2-1.4Kg and constitutes 98% of the total nervous system. Encephalogy is the study of structure, working and function of brain.
The brain is cover by the skull. Inside the skull. The brain is covered by Cranial Meninges consisting of a an outer layer called Dura mater. A very thin middle layer called Arachnoid. And an inner layer called Pia meter.
The brain is divided into three parts
1)Fore brain:
It is the thinking part of the brain. It consists of cerebrum thalamus and hypothalamus. Cerebrum forms the major part of the human brain. A cleft divide the cerebrum longitudinally into two halves. Which is called as Cerebral hemispheres. The layer of cells which covers the cerebral hemispheres is called cerebral cortex and is thrown into prominent folds.
Hypothalamus lies at the base of the thalamus. The hypothalamus contains a number of centres which control body temperature. urge for eating and drinking. It also secretes hormones called hypothalamic hormones.
Fore brain consists of Olfactory lobes,cerebrum and Diencephalon.
a)Olfactory lobes: it relay sense of smell received from olfactory epithelium to the temporal part of the cerebrum.
b)Cerebrum: It is the largest part of brain. It occupies the front, lateral and superior parts of the brain.it is thinking part of brain.

c)Diencephalon: It lies the inferior side of the cerebrum. It has epithalamus on its roof, thalami on the sides and hypothalamus on floor.
2) Mid Brain
It is small area having two thick fibrous tracts and four swellings known as corpora quadrigemina. The mid brain is located between the thalamus/hypothalamus of the forebrain and pons of the hind brain. A canal passes through the mid brain called cerebral aqueduct
3)Hindbrain
The hind brain comprises pons. cerebellum and medulla (also called medulla oblongata)
a) Pons: it is cross wise bundle of nervous tissue that lies on the anteroventral side of medulla. It connects the cerebellum, medulla and cerebrum. It function as relay centre among different parts of brain.
b) Cerebellum: it is second largest part of the brain. constituting 12.5% of the total. It has two large furrowed lateral Cerebellar hemispheres and a central worm likes Vermis.
It coordinates the muscular activity of the body. also maintains equilibrium or posture of the body
⦁ Medulla Oblongata: it is the hindermost part of the brain which lies below cerebellum. It controls many involuntary actions like respiration, heartbeat, regulation of blood, reflex centre, coughing, sneezing, salivation, etc.

It is the narrow cylindrical lower part of the central nervous system which is 43-45cm in length.it lies inside the vertebral column. The terminal region is connected region to the end of vertebral column by fibrous connective filum terminal.

1) it is the centre of many reflex activities.

2) it conducts sensory and motor impulses to and from the brain.

HOW DO ORGANISM REPRODUCE(REPRODUCTIVE HEALTH)

HOW DO ORGANISMS REPRODUCE(SEXUAL REPRODUCTION)