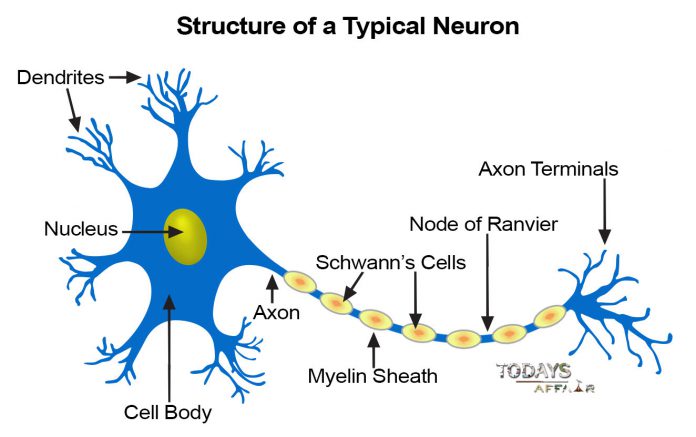 It is the network of nervous organs, nerves and neurons that controls and coordinates body activities with the help of electrical impulses produced in response to internal and external stimuli.

STIMULI:- It is an agent, factor, chemical or change in the external or internal environment which brings about a reaction in the organism.

RESPONSE:- it is the reaction of the organism to a stimulus.

IMPULSE:- it is self-propagated electrical current that runs along the surface of the nerve fibre for passage of information

RECEPTORS:- they are the cells, tissue and organs which are capable of receiving particular stimuli

EFFECTORS:- They are muscles, glands, tissues, or cells, which act in response to a message, received from the nervous system.

1)Photoreceptors:- Detect light and form images. They occur inside eyes.

2)Gustatoreceptors:- Detect test. Located in taste buds on the tongue and other parts of the buccal cavity.

5)Statoreceptors:- Detect changes in equilibrium. Located in the inner ear.

6)Tangoreceptors:- Tactile or touch receptors. Present in the skin.

7)Pain and Pressure Receptors:- Located in the skin and deeper tissues.

STRUCTURE OF NEURON OR NERVE CELL 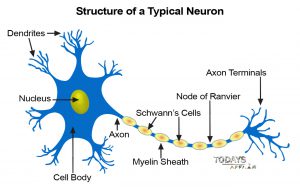 The neuron is a structural and functional unit of the nervous system that is specialised to receive conduct and transmit impulses.

A neuron has three parts-body, dendrites and axon.

*The term neurites is used for both dendrites and axon.

a)Cell body or cyton:- It is broad, rounded, pyriform or stellate part of the neuron that contains a central nucleus, abundant cytoplasm and various cell organelles except centrioles

A neuron cannot divide. Injured neurons are neither replaced nor repaired

The cytoplasm of the cell body is called neoplasm.

b)Dendrites(dendrons):- They are fine short and branched protoplasmic processes of the cell body that pick up sensations (physical, mechanical, electrical, chemicals) and transmits the same to the cell body.

Nissl granules and neurofibrils are present in dendrites

c)Axon:- it is a long fibre-like cytoplasmic process that carries impulses away from the cell body. Axon are branches terminally, the terminal branches are called telodendria or terminal arborisation Their terminal are often Knob like

It is covered by one or two sheaths called Nerve fibres.

The cell membrane covering the Axon is called Axolemma.

The cytoplasm of the Axon is termed as Axoplasm It lacks Nissl granules.

A nerve fibre having Myelin is called Myelinated. Myelinated nerve fibres are more efficient in transmission of the impulse

At intervals, they bear unmyelinated area called Nodes of Ranvier.

A neuron can be sensory, Motor or Connector

Sensory or Afferent Neuron:- It picks up sensations from the receptors and transmits the same to another part like central nervous system.

Motor or Efferent Neuron:-  It carries message to the muscle, gland or an organ to perform its function.

Connector or Interneuron:-  It is a special neuron which passes the message from a sensory neuron to motor neuron.

It is a narrow gap containing communicating junction between two neurons where an axon terminal comes in near contact with dendrite terminal of the next neuron.

Axon terminal is expanded to form a presynaptic knob 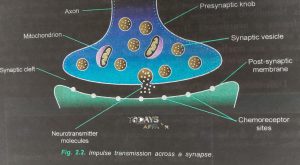 Neurotransmitter:- it is a chemical secreted by axon terminal for transmission of an impulse to the next neuron. Muscle.gland or organs e.g l, acetylcholine, noradrenaline, glutamic acid